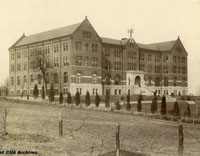 On July 2, 1911, the first Library classes were taught by members of the University Library Staff and librarians from the District of Columbia Public Library so that by 1930, a complete four-summer training program was offered and a certificate awarded. Elizabeth Stone, former department chair, later became American Library Association president and designed the America’s Libraries Postage Stamp.

A Century of Knowledge, Service, and Discovery: Library Education 1911-2011 reflected on the profession and its accomplishments across the century and laid the groundwork for its direction in the next 100 years.

The celebration featured a digital exhibit with a photo gallery and guestbook.